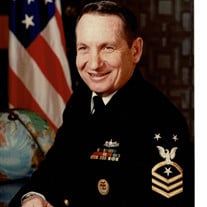 Walter Hugh “Chief” Atkins born September 03, 1937, passed away Saturday, March 7, 2020 following a long illness. He accepted Christ as his Savior as an adult and truly became a new creature in Christ. His first phone call was to his mom. As every mom knows, the most important thing is for her children to know the Lord. Chief proudly served 33 years in the U.S. Navy. He was a Command Master Chief who completed 3-one year deployments to Vietnam and saw and experienced many combat missions. He enjoyed a second career as a Major League Baseball scout. In 2018, he was honored with the Distinguished Service Award from the Association of Alabama Baseball Coaches. He loved Alabama football and always wanted his Tide to win. Always. Most importantly, the game of baseball and the Alabama Crimson Tide were the foundation of many special friendships that extended well beyond sports. He loved nothing more than spending time with his girls, their husbands and his five grandchildren. The love of his life was his precious bride, Weezie. He truly loved her as Christ loved the Church. Chief was preceded in death by his wife, Louise Atkins, his parents, Carl and Bell Atkins, his sisters, Edith Wilson, Carrie Ann Simpson and Emma Sue Willingham; and his brother Hubert Atkins. He is survived by his daughters, Karen (Grant) Cochrane, Kim (Wayne) Lawter, and Karla (Andrew) Byrd, by his grandchildren, Braxton Foster, Walter Blake Foster, Will Cochrane, Hannah Cochrane and Christopher Lawter and his sister Christine Leath and many nieces and nephews. He was known by various names in his life. Growing up in rural Georgia, he was known as Hugh Boy. When he joined the Navy, his friends called him Chester and, upon retirement, he was known as Chief. In his later years, his friends called him Walt. But his favorite name by far was Granddaddy. In lieu of flowers please make donations to the Big Oak Boys Ranch. Visitation will be held Saturday, March 14, 2020 at Guntersville Memorial Chapel from 10-12pm. Funeral Services will follow at 12:00pm with burial at Brookwood Cemetery.

Walter Hugh &#8220;Chief&#8221; Atkins born September 03, 1937, passed away Saturday, March 7, 2020 following a long illness. He accepted Christ as his Savior as an adult and truly became a new creature in Christ. His first phone call was... View Obituary & Service Information

The family of Walter Hugh Atkins created this Life Tributes page to make it easy to share your memories.

Send flowers to the Atkins family.