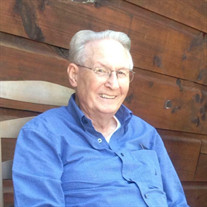 Guntersville, AL — Sidney Wayne Canfield, 86, died Saturday, December 8, 2016 at Crestwood Hospital following a two year battle with Leukemia. He leaves his wife of 65 years, Mary Lewis Canfield; his son, Michael Canfield (fiancée Sherry Urban); his daughter, Sandi Canfield Hulebak (Jerry); two grandchildren; Sydney Allison Hulebak (Washington DC) and Gunnar Lewis Hulebak (Auburn, AL), a sister Betty Canfield Fortner and numerous nieces and nephews. He was preceded in death by his parents Clarence Douglas Canfield and Essie Teal Canfield and a brother, Billy Gene Canfield. Mr. Canfield was born and raised in Guntersville and spent most of his life here. In 1953, he joined the U.S. Army, where he served for two years in Korea. After serving his country, Mr. Canfield came back to Guntersville and started his career with the Federal Government retiring as Admin Officer for Production and Procurement in 1991. After his retirement, he began pastoring at local churches (something he had done part time for many years) until he finally had to give up the church to take care of his wife full-time, who had Alzheimer’s. He not only took pride in being the pastor of a church, but truly relished the friendships at each one. Mr. Canfield had a passion for his grand-children, Alabama Football, old John Wayne movies and old war movies. Funeral services will be held Saturday, December 10, 2016 at Guntersville Memorial Chapel with visitation from 1:00-3:00 and the funeral at 3:00. Burial will take place immediately after the service at Marshall Memorial Gardens. In lieu of flowers, please make donations in Mr. Canfield’s memory to the Russel Hill Cancer Foundation at www.russelhill.org.

The family of Sidney Wayne Canfield created this Life Tributes page to make it easy to share your memories.

Send flowers to the Canfield family.