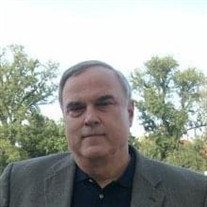 Randall Earl Rush, 73, of Guntersville, Alabama, died on August 12, 2021, after a courageous battle with idiopathic pulmonary fibrosis. He was born to George Earl and Clarice McKenzie Rush on January 14, 1948, in Scottsboro, Alabama. He played basketball on the Section High School team where he served as captain on the 1966 team and was all-county, all-area, and all tri-state. Randall attended Auburn University where he graduated with a degree in chemical engineering. He later obtained a law degree from the Birmingham School of Law. Randall retired in 2015 from Southern Company, where his legacy of technical ingenuity and leadership excellence lives on across the utility industry. Known as a trailblazer who challenged himself and those around him, he was committed to achieving outstanding results and motivated his teams to do the same. Randall joined Southern Company in 1973 as was one of the research and development organization’s first chemical engineers. In the early days of the Clean Air Act, Randall pioneered the company’s scrubber program. His research directly led to a critical Southern Company “Big Bet” – to build scrubbers from plastic. His research on other environmental control technologies, such as selective catalytic reduction, also formed a foundation for the entire industry. Randall guided Southern Company’s early development of liquid solvent-refined coal in Wilsonville, Alabama, under the Department of Energy’s Clean Coal Technology Program. This led to the establishment of the Power Systems Development Facility in 1990 – the precursor of the National Carbon Capture Center, in Wilsonville, Alabama. Randall’s unique vision was instrumental in the development and pilot demonstration of the first-of-a-kind Transport Integrated Gasification technology. Randall is remembered for his booming voice, his magnetic presence, and his drive to discover solutions. He cared deeply for his team, was devoted to his family, and loved hunting and fishing. He is survived by his wife Carreen Webb Rush; his children Katherine Rush Weitzman (Tedd Weitzman), Anna Elizabeth Ciaccio, Amanda Gibson (Sarah Fricke), Bradley Gibson (Diane Lee Williams King), and Caitlyn Jones (Daniel Payne). He also leaves behind his siblings, Reverend Ricky Max Rush (Pat Kirby Rush) and Cheryl Rush Rhodes; his grandchildren, Ava Stuart Ciaccio, Jackson Oliver Ciaccio, Asher Violet Weitzman, Elizabeth Shook Weitzman, and Arthur Edward Weitzman, John Brantly King, James Henry King, and Daniel Taylor Fricke III. He is predeceased by his parents, George and Clarice Rush; his brother, Barry Rush, and his son, Michael Stuart Rush. Services will be held Monday, August 16, at 11 a.m., at Union Grove Number One Missionary Baptist Church in Albertville, Alabama. Visitation will be 9:30-10 a.m. for family, 10-11 a.m. for friends at the church. The church is located at 1189 Rice Mill-Chavers Rd, Albertville, Alabama 35951. Friends are invited to attend the internment service at 2 p.m.at the Dutton United Methodist Church, 136 Church Circle, Dutton, Alabama 35744. In lieu of flowers, the family requests donations to the Alabama Wildlife Federation in memory of Randall Rush for the Outdoor Education Center, www.alabamawildlife.org. Out of an abundance of caution, masks are encouraged and will be available for use at both venue locations.

Randall Earl Rush, 73, of Guntersville, Alabama, died on August 12, 2021, after a courageous battle with idiopathic pulmonary fibrosis. He was born to George Earl and Clarice McKenzie Rush on January 14, 1948, in Scottsboro, Alabama. He played... View Obituary & Service Information

The family of Randall Earl Rush created this Life Tributes page to make it easy to share your memories.

Send flowers to the Rush family.