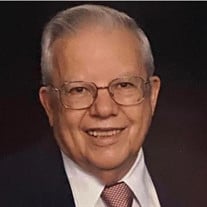 Mr. Quitman Carson Byrd age 85, of Guntersville, passed away Tuesday March 31, 2020 at his residence. Graveside service will be Saturday April 4, 2020 at 2pm at Guntersville City Cemetery. In lieu of flowers family request donations be made... View Obituary & Service Information

The family of Quitman Carson Byrd created this Life Tributes page to make it easy to share your memories.

Send flowers to the Byrd family.