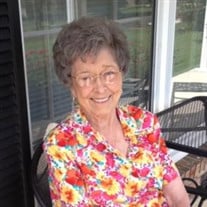 Mary Lewis Canfield, 92, died Tuesday, February 5, 2019 at Crestwood Hospital following a eight year battle with Alzheimer’s. She leaves her son, Michael Canfield, her daughter, Sandi Canfield Hulebak (Jerry); two grandchildren; Sydney Hulebak Willoughby (Alex) (Atlanta, GA) and Gunnar Lewis Hulebak (Auburn, AL), two sisters Gracie Hand (Guntersville, AL), Frances Tucker (Huntsville, AL) and numerous nieces and nephews. She was preceded in death by her husband, Sidney Wayne Canfield; parents, 2 brothers (JB Lewis and LD Lewis) and 4 sisters (Della Walker, Gertha Lewis, Eula Mae Cooper and Faye Phillips). Born and raised in Hebron, AL, the daughter of John Murphey and Leona Holt Lewis, she spent most of her life in Alabama. She and Sidney Wayne Canfield were married in Mississippi in1950 and made their home in Guntersville, AL. They were married for 65 years before the death of Mr. Canfield in 2016. Mrs. Canfield worked for the Federal Government before her retirement in1986. After her retirement, she traveled with Senior Groups to many parts of the country and spent most Saturdays going to yard sales, always looking for that special treasure. She had a great sense of humor and was loved by everyone who met her. Mrs. Canfield had a passion for her grand-children and spent as much time as she could with them. In lieu of flowers, the family suggests memorials in Mary’s name be made to The Alabama Chapter of the Alzheimer’s Association at https://www.alz.org/al?set=1

The family of Mary Pauline Canfield created this Life Tributes page to make it easy to share your memories.

Send flowers to the Canfield family.