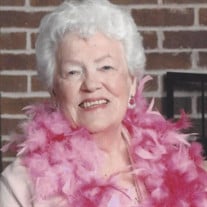 LaTayne Haynes After a long illness, LaTayne Haynes, 88, former longtime resident of Guntersville, passed away on Tuesday, September 1, at St. Vincent’s St. Clair Hospital in Pell City. She was a beloved mother, grandmother, great grandmother and great great grandmother. LaTayne was a former member of Guntersville First Baptist Church where she played an active role in the choir. She participated in several choirs throughout Marshall County and was known for her beautiful soprano voice. Singing was an important part of her life from childhood until right before her death when she could be heard humming her favorite hymns. LaTayne grew up in Valley, Alabama, and was one of nine children. She attended college in LaGrange, Georgia. In 1950, she married Enoch Haynes, and they had 4 children. They moved to Guntersville in 1958, raised their family, and she resided here until 2011, when she moved to Odenville to live with her daughter and son-in-law. She previously worked for the Army at Redstone Arsenal for many years until she retired. After the death of her husband, she worked in the office of the First Baptist Church of Guntersville. She served in several volunteer capacities throughout her life; she was a Mother Advisor for the Rainbow Girls, helped with various events in which her children were involved, was a volunteer at the hospital, and participated in various community choirs. LaTayne was preceded in death by her parents, Jessie James and Mary Effie Haddaway, her eight siblings, and her precious husband of 40 years, Enoch Haynes. She is survived by her loving children: Michael Enoch Haynes (Susan) of Kingston, WA, Sharon Walls (Ken) of Odenville, AL, Dennis Haynes of Carrollton, GA, and Tim Haynes (Sheila) of Guntersville. She leaves behind 8 grandchildren, Amy Meadows, Andy Haynes, Kyle Walls, Kevin Walls, Misty Hannah, Paul Ramsey, Barry Haynes and Caleb Haynes. She was blessed with 19 great grandchildren and 6 great-great grandchildren. The family graveside service will be held today (Saturday) at Marshall Memorial Gardens conducted by Aaron Johnson. If you wish to make a donation in her memory, the family suggests the Alzheimer’s Association.

The family of Lucy LaTayne Haynes created this Life Tributes page to make it easy to share your memories.

Send flowers to the Haynes family.