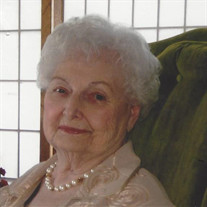 Lorraine Frances Anderson passed away Monday, September 9, 2019 at Barfield Nursing Home after a lengthy battle with Alzheimer's disease. She was 96. Lorraine was born September 20, 1922 to John Lukowicz and Dorothy Dumas in Antigo, Wisconsin. Lorraine spent most of her life in Wisconsin, before moving to Guntersville 13 years ago, to live with her son and daughter in law. Lorraine was proud of her service in the Navy during WWII. She worked at the Marathon Rothschild Credit Union for 37 years retiring as president manager. Lorraine was married to Allan R. Zahn, and later to Raymond Anderson. She was active throughout her life, enjoying traveling, golfing, bowling, playing cards and reading. She was a matriarch of the family and enjoyed spending time with her grandchildren and great grandchildren. Funeral services will take place on Thursday, September 19th, with visitation taking place at 10:00 immediately prior to the funeral service, at St. John's Lutheran Church in Mosinee, Wisconsin. Lorraine is survived by her son, Dr. Allan Zahn (Wendy); grandchildren, Beth Allen (Jim), Kenneth Duberstein, Gina Duberstein, Tiffany Zahn and Zachary Zahn. In addition, she leaves behind 10 great grandchildren and 5 great great grandchildren. She was preceded in death by her parents, 2 husbands, daughter, Sherol Duberstein and brothers, John Lukowicz and Major Willis Lukowicz, killed in WWII.

The family of Lorraine Frances Anderson created this Life Tributes page to make it easy to share your memories.

Send flowers to the Anderson family.