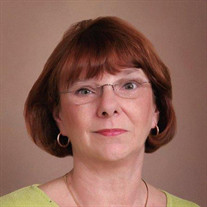 Lillian “Rusty” (Cassady) Ogden, age 72, of Guntersville, AL, passed away at her home Saturday, September 26th, 2020. Born June 15th, 1948 in Waynesboro, VA, to Allen and Lillian Cassady, Rusty was the youngest of four children. A graduate of Waynesboro High School and certified in bookkeeping from the National Business College of Roanoke, VA, Rusty enjoyed a variety of administrative jobs throughout the country while married to her first husband, Allen Shifflett. After traversing the country for Allen’s work, they landed in Guntersville, AL in the early ‘80s. Rusty served on the board of directors for The Whole Backstage Theater for twenty-two years. She served as secretary and twice as board president. After helping with technical aspects of theater productions and as an assistant lighting designer, Rusty directed her first play; Agatha Christie’s, “The Mousetrap.” Comedy Murder Mysteries became her forte and she went on to direct many more plays, as well as portraying Nellie in “Dirty Works” and M’lynn in “Steel Magnolias.” As president, Rusty saw the theater company through its $1.5 million renovations completed in 2005. She retired from the theater in 2007. Rusty Fell in love and married Ellsworth Charles (Chuck) Ogden III in 1994. They enjoyed traveling, visiting England, Scotland, and Ireland. Rusty began volunteering at the Episcopal Church of the Epiphany where she eventually became the church secretary and the communications director as well as a lay reader, an Acolyte, a Crucifer, and carrier of the Gospel book. Preceded in death by her parents, Allen and Lillian Cassady, her sister, Kay Cassady, and her husband, Chuck Ogden. She is survived by a daughter, Lorie Corbus (Gregory Geller); brothers, Tommy Goble and Allen F. Cassady; Nieces, Kelly Chelena (Anthony Chelena); Kimberly Howell (Buford Howell); grandniece, Katie Kay Chelena; grandnephew, Matthew Chelena; and granddaughter, Marigold Corbus-Geller. In lieu of flowers, a donation can be made to the Memorial Fund for the Episcopal Church of the Epiphany at https://tithe.ly/give_new/www/#/tithely/mopView Condolences and memories can be shared online at https://www.guntersvillememorialchapel.com/obituaries/

The family of Lillian "Rusty" Cassady Ogden created this Life Tributes page to make it easy to share your memories.

Send flowers to the Ogden family.