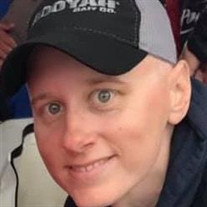 Jonathan Chad Henry, 36, died on June 26, 2019, at his home in Grant, Alabama, after a long and courageous battle with synovial sarcoma. Jonathan was born on October 28, 1982, in Kingsport, Tennessee. At the time of his death, he was a member of Connect Church in Guntersville, Alabama. He has left a legacy of faith and strength. Jonathan was preceded in death by his paternal grandfather John Henry. He is survived by his wife of 8 years, Alison Stallard Henry. He is also survived by his parents Phil and Jackie Henry; his brother Jaret Henry (Casey); maternal grandparents John and Ruth Gott; paternal grandmother Ruth Henry; and his parents-in-law John and Lana Stallard. Extended family members include his sister-in-law Jill Stallard Foy (Matt); his paternal aunt Brenda Forbes; his maternal uncles Roger Gott (KC) and Ron Gott. He is also survived by two nephews Cole Henry and Cooper Foy; and one niece Caroline Foy. In addition, he leaves behind a host of friends and his fishing family with whom he shared his love of sport, both professionally and personally. Jonathan was a successful professional fisherman on the FLW circuit and was the owner of Basswhacker Guide Service based on Lake Guntersville. He was a licensed Coast Guard Sea Captain. Jonathan never lost his sense of excitement over all aspects of hunting and fishing and of helping others enjoy those sports. In addition to his visitation and memorial service in Guntersville, on Monday, July 1, from 5:00 p.m. till 7:00 p.m. the family will receive friends at Midway Memorial United Methodist Church, 5532 Veterans Memorial Highway, Gate City, VA, where Jonathan and Alison began their life together as husband and wife. A memorial service will follow at 7:00 p.m. In lieu of flowers, it would be a gesture of love and support for memorial contributions to be made to Jonathan’s wife to help defray the expenses incurred during his illness. Memorials may be sent to Alison in care of her parents at 696 McClellan Town Lane, Gate City, VA 24251.

Jonathan Chad Henry, 36, died on June 26, 2019, at his home in Grant, Alabama, after a long and courageous battle with synovial sarcoma. Jonathan was born on October 28, 1982, in Kingsport, Tennessee. At the time of his death, he was a member... View Obituary & Service Information

The family of Jonathan Chad Henry created this Life Tributes page to make it easy to share your memories.

Send flowers to the Henry family.