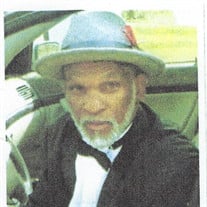 Johnny Gray Alexander was born on June 15, 1954 in Guntersville, Al to the late John and Frankie Alexander. At a young age, he began employment at Kendall Mills to Monsanto for 10 years until the company closed. After his employment with the... View Obituary & Service Information

The family of Johnny Gary Alexander created this Life Tributes page to make it easy to share your memories.

Send flowers to the Alexander family.