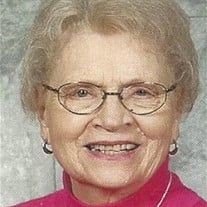 Ernestine Whitaker Smith, 85, passed away Wednesday May 24, 2017 at Barfield Health Care. She was raised in Grant, and graduated from DAR High School. She made Guntersville her home after marrying Wendell Smith in 1951. She retired from Marshall County Gas District. She was an active member of Henryville United Methodist church, serving many roles in the church and was an honored member of the Springers. She was especially proud of the 29 years she and Margaret Starnes spent teaching the Kindergarten Sunday School class. She loved spending time with her family, friends, and church family. She was an Election Poll worker in Claysville, Marshall County Christmas Coalition volunteer, RSVP volunteer and a Whole Backstage patron. She was known for her mischief while living at Barfield Health Care, where she made many new friends with the residents, staff and visitors. She is survived by children, Steven Smith (Dianne) and Janet Smith; grandchildren, Stephanie Smith and Brandon Smith; sister, Inez Ayers; nieces,Wanda Bright (Sonny), Linda Anderson(Ralph), Regena Glasgow (John); nephew, Eddy McBride (Linda);and sister-in-law,Kathryn Anderson (Martin). She was preceded in death by her husband Wendell Smith, parents Ernest and Katherine Whitaker, and sister Imogene McBride. The funeral will be Saturday, May 27 at 11:00 a.m. at Guntersville Memorial Chapel, with Rev. Joy Morgan officiating. A visitation will be held Friday, May 26 from 6:00 to 8:00 at Guntersville Memorial Chapel. Pallbearers are Brandon Smith, Eddy McBride, Doug Campbell, Leon Burchett, Butch Chaffin, Phil Robeson, Wayne Gandy, and Jordan Gandy. In lieu of flowers, donations can be made to American Diabetes Association, P.O. Box 15829, Arlington, VA 22215 (http://www.diabetes.org/donate ) or Henryville United Methodist Church

Ernestine Whitaker Smith, 85, passed away Wednesday May 24, 2017 at Barfield Health Care. She was raised in Grant, and graduated from DAR High School. She made Guntersville her home after marrying Wendell Smith in 1951. She retired from Marshall... View Obituary & Service Information

The family of Janet Ernestine Smith created this Life Tributes page to make it easy to share your memories.

Send flowers to the Smith family.