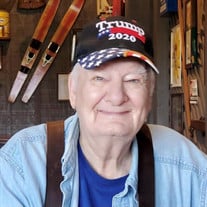 James “Jim” Willard Austin, Jr was the first-born child of James Willard Austin, Sr. and Mary Louise “Missy” Sisk Austin. He is survived by his wife Patricia “Pat” Austin, sons James “Jimmy” Austin, and Jason A. Austin and stepdaughter Kerrie L. Smith Tucker. Jim had eight grandchildren: Joshua Austin, Megan Austin (Reid), Andrew Austin, Cameron Tucker, Evan Austin, Ily Austin, Eliza Austin (deceased) and Allie Austin Scott. He is also survived by his very close family friends Randy and Barbara Panazze. He was a 1961 graduate of Scottsboro High School, a veteran of the United States Air Force, and was retired from the City of Scottsboro. Jim spent much of his retired life serving the North Alabama Young Marines and talking on his cell phone to long-time friends and family. He never met a stranger and would seize every opportunity to strike up a friendly conversation while in restaurants, places of business, the credit union and banks, just anywhere. He made sure to tell all the ladies he saw that they were beautiful or “purdy”. Jim liked to eat, tinkering with firearms, reloading bullets, sport shooting, talking and sharing his “true” life stories. He would share his memories of his most recent trip to Alaska. He also enjoyed short trips to the Smoky Mountains. He was a member of New Life United Methodist Church of Grant, AL. It brought him joy to worship the Lord and made constant efforts to pass out mints church attendees saying “Have a Blessed Day”. He passed out mints religiously to people in places he visited or patronized. There will be a Celebration of Life at The Venue in Guntersville, AL on October 30, 2021 at 2 pm. The family requests in lieu of flowers, donations be made to Shepard’s Cove Hospice408 Marling Road Albertville, AL 35951 (256) 891-7724. In Jim’s memory.

The family of James "Jim" Willard Austin created this Life Tributes page to make it easy to share your memories.

Send flowers to the Austin family.