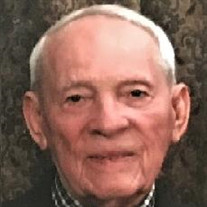 GUNTERSVILLE — Jack C. Godsey, Sr., 92 died peacefully Wednesday, August 16, 2017, at home surrounded by family and friends. Born January 2, 1925, the first of three brothers, Jack came into the world in charge, blazing a trail. Compassionate, loving, and a friend to everyone, Jack was loved by many. His gregarious, fun-loving personality often made him the life of the party, the emcee, and the comic relief in their travels and community endeavors. Having lost his father when a child, Jack learned early on from his mother that being family required a strong work ethic and the willingness to make sacrifices. At age 18, Jack joined the Army Air Corps, specializing in aeronautics.  Jack served his country faithfully in the armed forces during World War II until its end in 1945. Graduated from Auburn University in 1950 with an electrical engineering degree, Jack began a 40-year rocket science career at Thiokol Corporation as director of quality control. His efforts supported the work of three branches of the military, and his brilliant and creative mind helped launch a new age in NASA’s space shuttle travel. Life outside of work was full too. Jack and Judy were faithful charter members of the New Life Church in Grant, Alabama. They later invested themselves in Guntersville First United Methodist Church, where they have remained faithful members.  Jack loved to sing in church choirs, which he did for 35 years.  When he served as Sunday school teacher, people often eagerly awaited his interpretations of the lessons. Though an engineer by training, Jack was also a wordsmith. He authored many poems— including the family-favorite titled “88,” which he wrote for his 88th birthday—as well as short stories and a published novel at the age of 90. The Odyssey of Jille Fox by Spearman Jack Godsey (pen name) captured much of what fascinated Jack—history, intrigue, love, courage, and strength. All his life, hard work was Jack’s ally. After retirement, with the help of his wife, Jack designed and built a home atop their multi-acre mountain-top property. “Getting tired feels good. I have always been strong enough to do whatever I needed to do.” Until the year of his death, Jack was blessed with remarkable health, and he used his strength to make life better for his family, his church, his community, and his friends. Into his 90s, Jack worked his property, leading to a debilitating injury that finally slowed him down. Left to cherish a lifetime of memories are his wife of 27 years, Judy Hawk Godsey; children Lynn Godsey Tipton, James Howard Godsey, Jean Allyse Godsey, and William Hugh Godsey (wife, Rhonda); children Randall Stuart Walker (wife, Ruth Ann), Lisa Ann (Walker) Tuten (husband, Brad), and Milla Jane Walker; brothers Max Godsey (wife, Carol), and R. Kirby Godsey (wife, Joan); nine grandchildren; five great-grandchildren; many nieces and nephews; and many close friends. Jack was preceded in death by his son, Jack C. Godsey, Jr.; his parents, Spearman Columbus (Jack) Godsey and Chloe Godsey Carter; his son, David Bruce Walker; and his grandson, J. Randall Stuart Walker. A memorial service in honor of Jack was held on Friday, August 18, 2017 at the Guntersville First United Methodist Church, Pastor Terry Bentley officiate. The family asks that memorial gifts be made to Guntersville First United Methodist Church. Jack’s family is indebted to the kindness and support of many wonderful friends and family, and especially to his caregivers Heidi, Terra, and Betty.

The family of Jack C Godsey created this Life Tributes page to make it easy to share your memories.

Send flowers to the Godsey family.