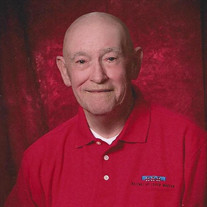 OBITUARY Hubert Woodrow Franklin Jr. 77 of Grant passed away Sunday evening at his residence. Hubert was born in Athens Alabama, and Graduated from Athens High School. He served in the National Guard before he went full time into ministry at... View Obituary & Service Information

The family of Hubert Woodrow Franklin Jr. created this Life Tributes page to make it easy to share your memories.

Send flowers to the Franklin family.