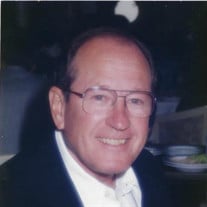 On November 2nd, 2020, Hal Vandervoort passed away peacefully at home surrounded by his family. Born in Birmingham, Alabama on June 14, 1928, he was the son of Harold Mertz Sr. and Anna Marie (Hinds) Vandervoort. He was raised and attended high school in Arab, Alabama. After entering the US Navy in 1946 and serving aboard the Battleship USS Missouri for 2 years, Hal graduated from The University of Alabama with a degree in Journalism in 1952. On October 3rd, 1953, Hal married Ken Luckie from Selma, Alabama and the couple moved to New Orleans, Louisiana where he worked for Travelers Insurance Company as a Field Supervisor, traveling southwest Louisiana for five years. They moved to Guntersville, Alabama in 1958 where he opened a general insurance company, The Hal Vandervoort Agency. During this period they raised four children, Ann, Kenneth (Buddy), Julie and Susan. Ken died in 1985 and Hal married Andrea Tutt Luther in 1988. She had two children, Gripp and Sara who Hal loved as his own. Active in his community, Hal joined the First United Methodist Church and became involved as Lay Leader, Chairman of The Administrative Board, Church Treasurer and served on many other committees. He served as President of the Guntersville Toastmasters Club, Chairman of the Guntersville Industrial Board, President of Marshall County Hospice and on the Board of Directors for First National Bank, Gulf States Bank, AmSouth Bank and the Guntersville Chamber of Commerce. In his free time, Hal enjoyed raising cattle and working with horses on his beloved family farm at Red Hill. Hal was preceded in death by his parents, his first wife, Ken Luckie Vandervoort, and his sister, Mary Julia Vandervoort Rehm. He is survived by his wife Andrea, his children, Ann Hackney (John), Buddy Vandervoort (Walton), Julie Moultrie (Steve), Susan Tully (Jeff), Gripp Luther (Leigh Anne), and Sara Schilleci (Michael). He is also survived by nineteen grandchildren and thirteen great grandchildren. A family graveside memorial service will be held on Saturday, November 7th, 2020 at the Vandervoort Family Cemetery in Browns Valley at 11:00am. In lieu of flowers, the family asks that donations be made to Guntersville First United Methodist Church or Shepherd’s Cove Hospice.

On November 2nd, 2020, Hal Vandervoort passed away peacefully at home surrounded by his family. Born in Birmingham, Alabama on June 14, 1928, he was the son of Harold Mertz Sr. and Anna Marie (Hinds) Vandervoort. He was raised and attended high... View Obituary & Service Information

The family of Harold Mertz Vandervoort created this Life Tributes page to make it easy to share your memories.

Send flowers to the Vandervoort family.