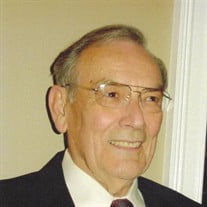 Glen Carroll Wakefield, a resident of Guntersville since 2004, Glen age 90, went to meet Jesus on Friday, September 24, 2021. Glen was born to the late Gideon Cephus and Sadie Ileen McLin Wakefield in Giles County, TN on December 09, 1930. He was a graduate of Middle Tennessee State University. While at MTSU he was inducted into “Who’s Who in American Universities”, and played on the basketball and baseball teams. After earning a BS Degree, he served two years in the US Army. He taught high school for a year and then was employed by BellSouth where he held various management positions throughout his 38 year career, retiring as District Manager. He was honored as “Boss of the Year”. While with the phone company, he worked in Nashville, Knoxville, Atlanta, New Orleans & Birmingham. He was an active member of Warrenton Methodist Church and was previously an elder at Woodland Presbyterian Church in New Orleans. Throughout his life he volunteered his time to his local communities. He served 10 years at Marshall North Hospital, 5 years at Georgia Mtn. Volunteer Fire Dept., Relay for life, Youth Baseball and boy Scouts. He served on the Hoover, AL Planning and Zoning Commission for 16 years and the Riverchase Homeowners Association. He is survived by his wife Carolyn Wakefield, daughter Kathy Collins (Scott) of Birmingham, son Michael Wakefield (Shawn) of Canton, GA, step-son Steven Garner (Jeanne) of St.Croix USVI, grandchildren Chris (Adrien) Wakefield, Kyle (Kristen) Dudley, Linden Dudley-Mathis, Steven Dudley, Morgan and Dylan Garner, 4 great-grandchildren, Brothers Carl Wakefield and Earl (Corky) Wakefield, and a number of nieces and nephews. He is predeceased in death by his first wife Bertha (known as Trudie) and brothers Wayne Wakefield, David (Rade) Wakefield, and Dr. Paul Wakefield. In lieu of flowers, please send donations to Adonai Family Care. 7624 Overton Street, Owens Cross Roads, AL 35763 or Warrenton Methodist Church

The family of Glen Carroll Wakefield created this Life Tributes page to make it easy to share your memories.

Glen Carroll Wakefield, a resident of Guntersville since 2004,...

Send flowers to the Wakefield family.