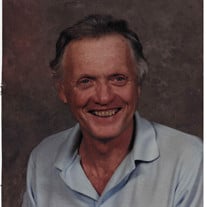 Ernest George Moore Jr. (Ernie), of Guntersville, passed away unexpectedly on December 28 at Marshall Medical Center South. Ernie was born on November 22, 1931 in Washington D.C. to Margaret T Moore and Ernest G. Moore Sr. and grew up in Bethesda, Maryland where he met his first wife, life-long friend, and the mother of his children, Dorothy Jeannette Fojt (Dot). After serving in the Army from 1953 to 1955 in Germany, Ernie graduated from North Carolina State University with a B.S. in electrical engineering. He started his career working for IBM, moving his family to New York, Oregon, California, Montgomery, Huntsville, and Guntersville before retiring from IBM in 1983. Ernie loved sailing and founded the Browns Creek Sailboat Marina soon after his family moved to Guntersville in 1963. He built the Marina from scratch in his front yard on Browns Creek Road, later moving it to the south end of Browns Creek Road, where he greatly expanded and improved the business. He also started several additional businesses, including dredging and pile-driving, boat hauling, boat piloting, and a residential property LLC. For several years he taught sailing at the University of Alabama – Huntsville. He was an active, longtime member of the Epiphany Episcopal Church in Guntersville, to which he donated generously and where he previously served as a Senior Warden. He also donated generously to the Whole Backstage Theatre and the Guntersville Teen Club which Dot founded with help from other community members. His survivors include his children, Robert Ernest Moore of Guntersville and Jeannette Lynn Ogden of Milton, Florida; his sister, Lucille Moore Dettor, of Port Tobacco, Maryland; sister-in-law Patricia Glover of Albertville; and former wives Barbara Mrazek of Huntsville, Florence Weldon of Blountsville, and Virginia McCrary of Guntersville. Ernie lived life as an adventure, with many varied interests over his 85 full years of life. He enjoyed travelling, hiking, and visited almost every state in the US, with several summers spent sailing in South Eastern Alaska and the Bahamas. He also traveled extensively in Europe and Central and South America, including lots of travel via bicycle. As a teen he rode his bike from one end of the Outer Banks to the other as family roots are from New Bern, North Carolina. His memorial service will be at Epiphany March 18, 2017 at 1PM during the red maple bloom season of springtime. In lieu of flowers, donations should be made to the Epiphany Episcopal Church Memorial Fund. Update Last rite services for Ernest G. Moore Jr. Saturday, March 18, 1 PM at the Episcopal Church of the Epiphany in Guntersville. Celebration of Life immediately following at the North Alabama Sailing Marina (formerly the Browns Creek Sailing Marina) at 100 Browns Creek Road, Guntersville.

The family of Ernest George Moore Jr created this Life Tributes page to make it easy to share your memories.

Send flowers to the Moore family.