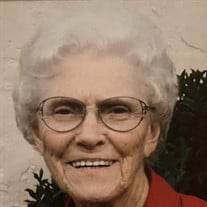 Era Nell Hughes Rains, passed away on May 28, 2020 In Guntersville at the age of 91. She was a beloved figure at Streamline Cleaners, a north town business which recently celebrated their 50 year anniversary. Mrs. Rains and her late husband Roy Powell Rains opened the cleaner in 1970. It is currently owned and operated by her daughter and son in law. Mrs. Rains was born on June 5, 1928 near Fyffe in DeKalb County. She grew up working hard on a farm, learned to sew and cook, which she later became known for among family, friends, and customers. In the 1950s, she worked for DuPont in Chattanooga. She later worked as a counter girl at a dry cleaner in Albertville. That experience served her well as she and her husband opened a dry cleaner in Guntersville. At that time there were five cleaners in Guntersville. She valued a strong work ethic, and a focus on customer service, which she credited for their long tenure there. It was not uncommon for Mrs. Rains to have cooked up some delicious dessert or snack that she would often share with a customer if they came in at just the right time. She's been known to pin a recipe to customers’ clothes if they had asked her about a certain favorite or struck up a conversation about cooking. At 91, Mrs. Rains was almost blind and was not very mobile, but she still loved coming to the cleaner a few times a week to interact with employees and customers. She was featured in the paper after her 90th birthday with her two older sisters. She is now survived by one of those sisters, Willodean Tidmore of Fyffe. Mrs. Rains was the baby at 91. She is survived by her daughter, Lou Ann Rains Patton and her beloved son in law, Scott Patton. She has three grandchildren whom she adored, Jack Hughes Patton, Joe Scott Patton, and Mamie Catherine Patton. In addition to her sister Willodean Tidmore, she is survived by 29 nieces and nephews, and a multitude of great nieces and nephews. She was preceded in death by her husband of 46 years, Roy Powell Rains, her parents Addison and Mamie Hughes, six siblings, Ira Hughes, John Robert Hughes, Palmer Boyd Hughes, P.B. Hughes, Mary V. Hughes Culpepper, and Ettie Lou Hughes. Mrs. Rains lived most of her married life in Asbury, but currently lived in Guntersville. She was a member of Beulah Baptist Church in DeKalb County. Funeral services will be directed by Guntersville Memorial Chapel with Interment at Asbury United Methodist Church Cemetery. Visitation is on Monday, June 1, 2020 12:00 p.m. - 2:00 p.m., with the funeral at 2:00 p.m. in the Chapel. Memorials can be made to Asbury United Methodist Church Cemetery Fund, 3205 Asbury Road, Albertville, Al 35951 or Shephard’s Cove Hospice, 408 Martling Road, Albertville, AL 35951.

Era Nell Hughes Rains, passed away on May 28, 2020 In Guntersville at the age of 91. She was a beloved figure at Streamline Cleaners, a north town business which recently celebrated their 50 year anniversary. Mrs. Rains and her late husband... View Obituary & Service Information

The family of Era Nell Rains created this Life Tributes page to make it easy to share your memories.

Send flowers to the Rains family.