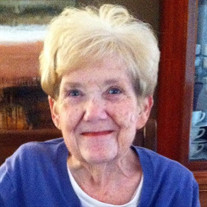 Eloise Stewart Patton passed away at home on March 2, 2018 surrounded by her family. A beloved teacher, she influenced countless individuals and made a positive impact on her church and community for over 62 years. Eloise was born June 22, 1934 in Randolph County, Alabama to Julia and Ezra Rice. One of 12 children, she grew up near Newell, Alabama until she was ten years old. After the death of her mother and later her father, she lived briefly with her grandparents and eventually with her aunt and uncle, the Reverend L.B. and Lora Stewart. After graduating from the University of Montevallo, she came to Guntersville in 1956 to teach Home Economics at the Marshall County High School. She met her husband, Billy Neal Patton, in Sunday school at the First United Methodist Church and began a long time dedication to church service. She and Billy Neal together lead the Methodist youth program for several years. She also directed the church nursery and Vacation Bible School program over a long period of time. In addition, she was a member of the choir, a teacher of the Children’s Minute, a communion steward, church board member and a Sunday school teacher for many years. She was appointed and served as the lay delegate for the annual Southeastern First United Methodist conference. A gifted educator, she taught at the Marshall County High School, Carlisle Park Middle School and ultimately second grade at the Guntersville Elementary School for a total of 37 years. Eloise was a teacher of teachers, a lover of children and inspiration to many. She was known for her classroom discipline, which left free time for her students to enjoy fun and enrichment. Her patriotism was contagious as she spearheaded the second grade patriotic program for many years and taught her students love of country and respect for the American Flag. Her year-end dance contest was anticipated every year and her manners classes were attended by the young and old. She always felt she was called to teach and only accepted the best of herself and her students; she strived to ensure they each achieved their full potential. “My teaching experience has been a wonderful, thrilling and rewarding journey. If I could do it all over, I would still be a teacher.” After retirement, Eloise did not stop serving others, but spent countless hours as a Friend of the Library board member, a Reading Buddy at the Guntersville Elementary School and as a key volunteer for Art -on -the -Lake and its scholarship program. She continued to influence others as a mentor to the members of the Twenty-First Century Club and to the Art-on-the Lake emerging and seasoned artists. This annual event was very dear to her heart as it supported local students and promoted awareness of the arts. Above all, Eloise was an excellent and devoted mother and the quintessential grandmother. After the early death of her husband, Billy Neal, she raised four children and remained steadfast with her community, church and school commitments. As a grandmother, she was a fun-loving, inspirational and giving Nana. Eloise was preceded in death by her husband, Billy Neal Patton; her parents, Julia & Ezra Rice and the Reverend L.B. & Lora Stewart; seven sisters; three brothers. Eloise is survived by her four children, Greg Patton (Cynthia) of Easley, South Carolina; Scott Patton (Lou Ann) of Guntersville; Julie Patton of Guntersville; Adonis Patton of Columbia, Tennessee and four grandchildren, Jessica, Jack, Joe Scott and Mamie; sisters Mildred Tarver (James) of Cedartown, Georgia, Shirley Bowman (Ron) of Anniston, Alabama, Linda Prichard (Steve) of Murfreesboro, Tennessee; brother Larry Stewart (Deb) of Weaver, Alabama. Donations in Eloise Patton’s memory may be made to the First United Methodist Church (539 Gunter Avenue, Guntersville, Alabama 35976) or to The Apple Foundation benefitting the Guntersville City Schools (Post Office Box 921, Guntersville, Alabama 35976/ www.applegrants.org).

Eloise Stewart Patton passed away at home on March 2, 2018 surrounded by her family. A beloved teacher, she influenced countless individuals and made a positive impact on her church and community for over 62 years. Eloise was born June 22,... View Obituary & Service Information

The family of Eloise Stewart Patton created this Life Tributes page to make it easy to share your memories.

Eloise Stewart Patton passed away at home on March 2, 2018 surrounded...

Send flowers to the Patton family.