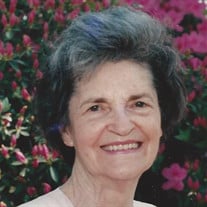 Mary Elizabeth “Lib” Duggin Davenport passed away peacefully on March 24, 2019 at 85 years of age in Huntsville, Alabama. She was the sixth child born to Houston and Gertie Duggin on June 15, 1933, in Cannon County, Tennessee. Lib graduated from Woodbury High School in 1951. She married pilot Milan Davenport on April 5, 1953 – he was the only person she would fly in an airplane with. Together, they moved around the Southeast residing in Biloxi, MS, San Antonio, TX, Humboldt, TN, and finally Guntersville, AL, where they lived for over 40 years. Lib retired from Marshall Medical Center, but her favorite job was being a mother to her three sons and one daughter and “Grandma” to her seven grandchildren. She believed her grandchildren could do no wrong. Her love language to her family was food, and she spent a majority of her time baking treats for her grandchildren and their friends. Lib will be remembered by her family as one of the kindest, most selfless people you could ever meet, and she will be sorely missed. Lib is survived by her husband, Milan Lafayette Davenport; her children Galen (Lee Ann) Davenport, Rhonda (Marty) Likos, Quint Davenport, and Ronnie (Sue) Davenport; her grandchildren Keegan (Casey) Davenport, Chris (Jessica) Likos, Andrew (Amy) Likos, Martie Ann Likos, Kate (Hardin) Namie, Gracie (Kory Love) Likos, and Daniella Davenport; 10 great-grandchildren; 14 nieces and nephews. Lib was preceded in death by her parents, Charlie Houston Duggin and Gertie Effie Duggin; her six siblings and their spouses, Carson (Johnnie) Duggin, Macon (Lin) Somerville, Mazle (Dudley) Campbell, Earl (Eunice) Duggin, Guy (Juanita) Duggin, and Nancy Duggin; two nephew, Doyle Duggin and Curtis Davenport. Visitation will be held Wednesday, March 27, 2019 Friends: 11:00 a.m. until 1:00 p.m. at Guntersville Memorial Chapel , The Funeral service will be held March 27, 2019 at 1pm at Guntersville Memorial Chapel, Bro; Marvin Davenport, with burial to follow at Brookwood Cemetery. In lieu of flowers may be made to the The Foundation for Marshall Medical Centers or a local foundations helping the betterment of children.

Mary Elizabeth &#8220;Lib&#8221; Duggin Davenport passed away peacefully on March 24, 2019 at 85 years of age in Huntsville, Alabama. She was the sixth child born to Houston and Gertie Duggin on June 15, 1933, in Cannon County, Tennessee. Lib... View Obituary & Service Information

The family of Elizabeth Duggin Davenport created this Life Tributes page to make it easy to share your memories.

Send flowers to the Davenport family.