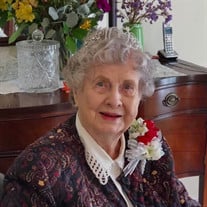 Edith Lynn Street Hallman was born before women had the right to vote. In her lifetime, she went from scratching out lessons on a chunk of slate, to manual & electric typewriters, to checking email daily on her computer. She loved email; she didn’t have to address envelopes or buy postage stamps. She was born November 17, 1918, at Hokes Bluff in Etowah County, the third of 11 children of Alonzo Cranford Street and Mattie Miller Street. She died November 13, 2019 due to old age and complications from a broken ankle and breast cancer. She was delighted to reach the age of 100 in November of 2018. In 1940, she married Charlie Myles Hallman immediately after graduating from Jacksonville State University. After further classes at Auburn, they both taught school, and earned $1,335 their first year of marriage. They were married for over 58 years, during which time their income increased. She lived 21 years as a widow. She taught for 30 years: English, typing and elementary school at Sardis, Woodville and Guntersville High School. During that time, she & Charlie invested in real estate. Charlie used to say, “My wife doesn’t want all the land. She just wants all the land that joins her land.” After retiring in 1975, she and her husband established Charlie Hallman Realty Co. on the Courthouse Square in Guntersville. Edie and Charlie were named Jacksonville State University’s Alumni of the year in 1983, where they endowed a scholarship trust fund. Proceeds have been awarded annually to a deserving graduate of Guntersville High School who plans to attend Jacksonville State University. A number of the recipients wrote thank-you notes. And those who didn’t went down a notch in her estimation. Upon moving to Guntersville in 1948, Edie & Charlie joined the First Baptist Church. She served as pianist for the Senior Adults from 1963 to 2001. For many years, she held the office of Sunday School class secretary, and produced the class directory. On her 95th birthday November 17, 2013, she was recognized as the oldest active member of the church. She was a member of the Guntersville Chamber of Commerce, Retired Teachers of Alabama, NARFE, and AARP. She assisted many other widows with the mounds of paperwork that must be handled after the death of a spouse. In 2010, Edie was happily surprised to be named Marshall County Retired Teacher of the Year. Edie’s prize-winning handwork was widely admired. She excelled at needlepoint, counted cross-stitch, crocheting, knitting, and cutwork embroidery. Her heirloom-quality quilts are treasured. Exercise was part of her daily routine well into her 90s. In addition to her floor exercises, she put 42,332 miles on her exercise bicycle. If the bike had not been stationary, she could have ridden around the world 1.7 times, but she didn’t enjoy travel.. She was especially grateful for friends who made her last years so pleasant: Fred & Mollie Jones, Pat Nunn, James & Cicely Swords, her primary caregivers, Carol Bearden and Rachel Brown, Heartlite Hospice, and Home Instead. Edith is survived by three daughters: Vicki Robb of La Jolla, CA; Lucy Russell (Ray) of Aub, Germany; and Becky Scheinert (Ken) of Warrenton, and three grandchildren: Betsy Brown of Guntersville; Brett Scheinert of Stockholm, Sweden; and Daniel Scheinert (Stefanie Lynch) of Los Angeles, CA. She is also survived by two brothers and one sister, and a host of nieces and nephews. Visitation will be 4 to 6 p.m. Sunday, November 17, 2019 at Guntersville Memorial Chapel and on Monday, November 18, 2019 from noon to 1 p.m. at the First Baptist Church of Guntersville. The funeral will follow at 1 p.m. Private burial will follow in Marshall Memorial Gardens: The family suggests any memorials be sent to the Methodist Men’s Group, who built a wheelchair ramp for her house, to the Charlie & Edith Hallman Scholarship at Jacksonville State University, or to the First Baptist Church Building Fund.

Edith Lynn Street Hallman was born before women had the right to vote. In her lifetime, she went from scratching out lessons on a chunk of slate, to manual & electric typewriters, to checking email daily on her computer. She loved email;... View Obituary & Service Information

The family of Mrs. Edith Street Hallman created this Life Tributes page to make it easy to share your memories.

Edith Lynn Street Hallman was born before women had the right...

Send flowers to the Hallman family.