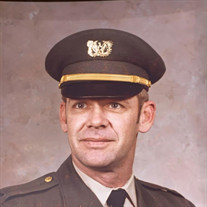 Chief Warrant Officer 4 (USA Retired) David Lawrence Spivey died August 5th, 2020 at his home in Guntersville, AL, with his family by his side and under the care of Encompass Health Hospice. David was born January 16, 1943 in Lacoochee, FL. He served with distinction as a helicopter pilot in the United States Army, including serving two tours in Vietnam and two European tours. He also held World Altitude Records, flying the Sikorsky CH54B Skycrane. The discipline and patriotism he showed never left him, as family and friends will attest. During his career in the Army, David earned several medals, including but not limited to, The Bronze Star, The Air Medal Number 26 with “V” Devices, The Army Commendation Medal and The Meritorious Service Medal. After retiring in 1981, he moved his family to Centerville, TN and soon started a second career with the US Postal Service and retired in 2003. He delivered so much more than the mail. His 13 mile walking city route enabled him to make many friends along the way, giving the children Jolly Ranchers, and the dogs a dog bone treat. He continued the Jolly Rancher tradition in his Christian ministry to children. During his time in Centerville he was an active member of Crossroads Baptist Church and served as a deacon. In 2014, David and Anne moved to Guntersville, AL where they enjoyed fishing and being close to family. Again, David became an active member and deacon at Creek Path Baptist Church. He was also a volunteer tax preparer for RSVP in the Arab office. He is survived by his wife of 58 years, Anne Marie Swartzlander Spivey, two sons, Darwyn D Spivey, Guntersville, AL and Daniel D Spivey (Amanda), Bon Aqua, TN. Three granddaughters, Alexia Marie Delarosa (Matt), Taylor Anne Spivey, Maggie Jane Spivey, and one great grandson, Archer Delarosa, four brothers and three sisters. He is preceded in death by his parents, Elmer and Alma Spivey and one sister, Marie Gregory. Visitation will be held Sunday, August 9, 2020 at Guntersville Memorial Chapel from 1:00pm until 2:00pm with Funeral Services at 2PM Interment will be at Florida National Cemetery, Bushnell, FL. Due to his love for children and his desire to provide a safe and nurturing environment, David was instrumental in the development of a child care center at his church which opened August 3rd 2020. In lieu of flowers, the family is requesting donations be made in his memory to Creek Path Child Care, PO Box 667. Guntersville, AL 35976.

Chief Warrant Officer 4 (USA Retired) David Lawrence Spivey died August 5th, 2020 at his home in Guntersville, AL, with his family by his side and under the care of Encompass Health Hospice. David was born January 16, 1943 in... View Obituary & Service Information

The family of David Lawrence Spivey created this Life Tributes page to make it easy to share your memories.

Send flowers to the Spivey family.