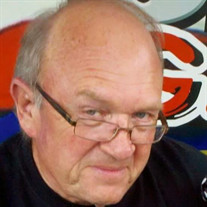 David “Dewayne” Bankson September 2, 1949 – January 3, 2017 Captain Dewayne “Doc” Bankson was called home in the early morning hours of January 3, 2017. He was preceded in death by parents David C. Bankson and Dora Lloyd Bankson; and parents-in-law Ivan E. Whitt and Margie C. Whitt. He is survived by wife Marie W. Bankson and daughter Alicia “Ali” M. Bankson; sisters Glenda B. and Margaret B. Oshita (Roger Coan); sisters-in-law Faye W. Holliday (Morris Holliday), Carolyn W. Preskitt (David Preskitt), Martha W. Davis (Michael Davis), Barbara W. Talley, Sherry W. Woodall (Allen Woodall) and brother-in-law Felton Whitt (Sarah Whitt); a host of nieces and nephews, cousins, aunts and uncles and other extended family; a myriad of friends and coworkers; special friends: Marshall County Sheriff’s Office; Sheriff Scott Walls and wife Mrs. Lynn Walls; Mr. and Mrs. Casey and Natalie Smith and their children Landen and Allie Reese; countless others. Captain Bankson was a decorated law enforcement officer, having served for more than 40 years. At the time of his passing, he was Jail Administrator/Warden at the Marshal County Sheriff’s Office. He loved his career and took pride in every detail. A natural leader and commanding presence, he had great respect for the law and those who, like himself, devoted their lives to serving and protecting the public. Those who knew him would say that he could be very tough. but that he had the biggest heart in the world. His passing will have a great impact on the law enforcement community and he will be greatly missed in that capacity. Dewayne was a 1967 graduate of Gaston High School in Gadsden, AL, and a loving family man. He played the roles of devoted husband, father, son, brother, uncle and cousin with all his heart. His “pride and joy” was daughter Alicia (“Ali”). They were “thick as thieves” and had plans to travel in the near future. He was overjoyed to have recently reconnected with his siblings and was looking forward to spending time with them. He loved children and animals, enjoyed barbequing, hunting, fishing, and he was almost always “up to something.” Services will be on Tuesday, January 10, 2017 at Guntersville Memorial Chapel. 1601 Henry St., Guntersville, AL 35976 Visitation for all those wishing to speak with family and share fond memories will begin at 4:30 p.m., followed by a memorial service at 6 p.m. Reverend David W. Bankson will officiate. Honorary pallbearers: Marshall County Sheriff’s Honor Guard, Scott Walls, Jason Bremer, Adam Riddle, Randy Amos, B.J. Graham, Alan Edmonds, Heath Thomas; brothers-in-law Felton Whitt, Terry Brown, Allen Woodall, Michael Davis, David Preskitt, Morris Holliday; nephews Christian Davis, Jonathan Oshita, Jason Oshita, Joshua Oshita; cousins Rev. David W. Bankson and Josh Page. Captain Dewayne “Doc” Bankson, Marshall County 303 End of Watch 1-3-2017

The family of David DeWayne "Doc" Bankson created this Life Tributes page to make it easy to share your memories.

Send flowers to the Bankson family.