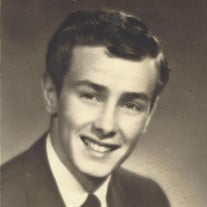 Guntersville, Alabama Blair J. Dravis,formerly of Sioux Falls, South Dakota, died at 85 years of age in Alabama. Blair was born on Sept. 27, 1933. He attended St. Joseph Cathedral for 12 years and graduated in 1952. Blair attended St. Thomas College, St Paul and subsequently entered the U.S. Army in October of 1953, during the Korean conflict. After Army service Blair attended South Dakota University , completing his Bachelors studies in 1959. He worked in Agri-Business Manufacturing Operations for the next 34 years. The last 19 years of work were out of New York, NY offices until retirement; while living in Fairfield and Westport, CT. After ten years retired in SunLakes, AZ., he returned to Alabama. Blair was born to Les & Bernice Dravis, both now deceased. Survivors include a sister, Sandi Rausch (husband Vic); nephews, Jason (wife Lexi) Rausch and Chad Rausch , of Columbus, OH. Five children: Annette Woodward (husband Craig), Mark and Stuart Dravis (wife Pam), of Guntersville; Dan Dravis(wife Cyndi) of Hampton Cove, AL and Sheila Dravis-Cosgrove (husband Jay) of Fairfield, CT; eight grandchildren and two great grandchildren. Blair had been married to the former Carol LeDuc in Sioux Falls in October, 1955. Carol had been a resident of Guntersville, AL, now deceased since April, 2017. Cremation will be performed by Guntersville Memorial Chapel. There will be a visitation at that location from 3:00 p.m. until 4:00 p.m. on October 7, 2018. Cremains will be transported to the Barnett-Lewis Funeral Home in Sioux Falls for interment by Barnett-Lewis at Woodlawn Cemetery in the Dravis plot. A Graveside service will be held October 11, 2018 at 11:00 a.m. All family and friends are welcome.

The family of Blair John Dravis created this Life Tributes page to make it easy to share your memories.

Send flowers to the Dravis family.