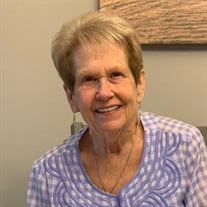 Linda Ann Patterson Finney, 77, of Guntersville, passed away at Marshall Medical Center North after battling Stage IV metastatic breast cancer. She was born in Cullman, AL, on September 29, 1942, to Robert Walton and Alta Pascal “Pat” Burns Patterson. Ann was preceded in death by a sister, Margie Lou Patterson; her parents, Robert & Alta Burns Patterson, and a grandson, Jebidiah Walker Searcy. She is survived by her husband of 37 years, John Finney, of Guntersville. Her children include: Stephanie Jill Ponder Searcy (Owen Searcy) of Newnan, GA; Ashley Heath Ponder (James Lesti) of Atlanta, GA; Alta Patricia Finney McCrary (Mac McCrary) of Guntersville, AL. Grandchildren are Joshua William Searcy, Jericho Walton Searcy, and Savannah Hamilton Searcy. Mrs. Finney was a 1960 graduate of Cullman High School. Ann was a sister of the Beta Sigma Phi Sorority, a City of Guntersville election worker and was a former president in The Guntersville Lake Homemakers’ Club. She was formerly employed by Heilig-Meyers Furniture Company in Arab. Linda Ann enjoyed baking for the public and cross-stitching. In 2004, she was featured on the show, “Style Court” on the E! Network. One of her favorite trips was traveling cross-country with her son. Additionally, she was a cheerleading coach for her younger daughter, Alta, who cheered in college. Arrangements are provided by Guntersville Memorial Chapel, with visitation from 12-2:00 P.M. Service will begin at 2:00 with interment at Holly Pond Cemetery following the service. The family has requested, in lieu of flowers, that donations be made to The Russel Hill Cancer Foundation in Huntsville, AL.

The family of Ann Finney created this Life Tributes page to make it easy to share your memories.

Send flowers to the Finney family.